What is it with cats and boxes?!? I have boxes all over my house and the cats get all depressed if I throw one away! by ActingLikeAnimals.com
Friday June 13th, 2014 at 10:48 AM

The post What is it with cats and boxes?!? I have boxes all over my house and the cats get all depressed if I throw one away! appeared first on ActingLikeAnimals.com.

samldanach
reply
This is perfectly awesome.

Hello! Funny thing, I was named after your character Wesley Crusher. Recently I came out as transsexual to my parents (I'm on MtF hormone replacement therapy atm). They have taken it very hard. One thing they have been on about is my name. I'm a HUGE geek and they are trying to pull the 'you won’t be Wesley, you won’t be nerdy' card. It’s bogus obviously, but now I'm thinking of names a lot. Is Lesley a nice name? Or is there another super awesome whole new girl name I should consider. Thoughts?
Wednesday February 12th, 2014 at 8:09 AM

Oh, you’re going to love this!! Wesley was originally going to be a female character, and her name was … wait for it … Lesley! So, yeah, I think Lesley is a perfect name.

I hope your transition goes well, and know that, even if it’s hard for them, your parents love you.

samldanach
reply
This is pretty awesome.

R, the statistical computing language of choice and what I use the most, can seem odd to those new to the language or programming. And I think this what holds a lot of people back and what keeps people stuck in limited software. The swirl package for R helps beginners get over that first hurdle by teaching you within R itself.

swirl is a software package for the R statistical programming language. Its purpose is to teach users statistics and R simultaneously and interactively. It attempts to do this in the most authentic learning environment possible by guiding users through interactive lessons directly within the R console.

Assuming you installed R on your computer already, install the package (and the other packages it depends on), make a call to swirl(), and you get a guide through the basics.

samldanach
reply
I need to take a look at this.

My heroes have always been mice. And dogs. by thebloggess
Wednesday January 29th, 2014 at 9:26 AM

So Victor and I just had a discussion about which superhero we would be if we could and it quickly escalated into a giant disagreement about who was considered a superhero and who wasn’t.  Specifically, we almost went to fist-city over whether Mighty Mouse and Underdog are superheroes.  They are.  Victor says they aren’t because “they’re crappy”.

me: Underdog is a totally a superhero.  He fights crime.

Victor: No one thinks a damn dog is a hero.  If you think a dog is your hero you’ve made pretty poor choices in your life.

me:  I bet the people he’s saved think he’s a hero.

Victor:  No one thinks that dog is a hero.  They’re happy they got their stuff back but they don’t want to grow up to be a dog in a cape.  And that’s the difference between characters and real superheros.

me:  I think anyone can be a superhero.  It’s all about intent to solve crime and superhuman abilities.

Victor: What about Garfield?  He has super-human abilities.

me:  What’s he fighting?  Mondays?  Lasagna?

Victor:  What about Rocky and Bullwinkle?

me:  Um…he’s a hero, but not a superhero. “Super” implies supernatural or superhuman strength.

Victor: You haven’t seen him die yet, have you?

Victor:  So Richie Rich is superhero?

me:  His job is not to solve crime.

Victor:  He stops robberies all the time.

me:  What superpower does Fred Flintstone have?

me:  It’s about intent, Victor. Intent to solve crimes that don’t benefit you.

Victor:  Casper the Friendly ghost.  That guy was always stopping robbers.  Not a superhero.

me:  Agreed.  But his intent wasn’t to go find robbers.  His intent was go hit on Wendy and be friendly.  Stopping robbers is just a side effect of being  nice.  Besides, he was already dead so he wasn’t risking anything.

me:  Well, he solved crimes, but he didn’t want to solve crimes.  And I wouldn’t say he’s superhuman.  So, no.

Victor:  He’s a talking dog who eats sandwiches. Is that normal dog behavior?

me:  All dogs eat sandwiches.

Victor:  He MAKES sandwiches.  But fine…Doctor Who.

me:  Ooh.  Hmmmmmmmm…no?  He’s superhuman and super awesome, but his intent is really just to explore and have fun and then he finds himself having to save the universe while he’s doing it.  But he doesn’t purposely go out looking for crime.  Although the TARDIS sort of does, but I think still no.

Victor:  So Scooby Doo and Doctor Who are the same.

me:  Bite your tongue.

Victor:  If neither are superheroes then by your logic, the Doctor is one heart and a big sandwich away from Scooby Doo.

Victor:  When kids don’t have a good breakfast everyone suffers.

Victor:  I mean, I don’t think he is either.  I’m just showing you all the holes in your logic.  Because they’re huge.

Point?  I’m not sure which of us is right and now I’m questioning my own sanity for even having this conversation.  So help me out and give me your opinion.

samldanach
reply
This may be a candidate for best conversation ever. 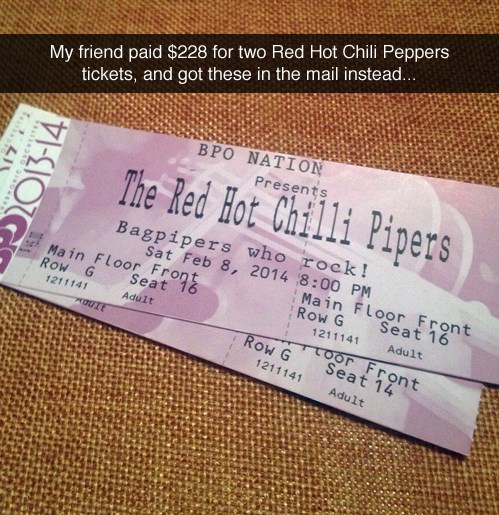 samldanach
reply
FWIW, the Pipers are pretty awesome. Not sure they're $228 worth of awesome, though...

grocery store Finland I was buying some groceries along with some snacks which included a tube of...
Tuesday January 14th, 2014 at 11:47 AM

I was buying some groceries along with some snacks which included a tube of Pringles, I was in a rather foul mood, so when I saw the cashier take the tube of Pringles that was upright on the conveyor belt, scan it, and try to put it to the next belt sideways I said:

Me: “Put that upright”

Cashier: *putting the tube sideways* “What did you say?”

Me: *Grapping the tube from her hand and slamming it next to the conveyor belt* “I said PUT IT UPRIGHT!”

Me: “When you put this product sideways, the chips inside may roll around, making it impossible to get ANY of them out of the tube intact, I have told this to the cashiers in this store before, how hard can it be to comprehend that if some product is upright before you scan it, it probably should remain that way afterwards?”

Me: “…can I just pay for my purchase sometime this year?”

I paid for my purchase and left, I regretted my actions afterwards, though I still believe the cashiers should pay attention to ‘small’ details such as how the customer has placed the items on the belt, and put them back in same position afterwards, without throwing them in the general direction of the second conveyor belt like some cashiers tend to do.

samldanach
reply
Written by someone who has clearly never been a cashier. This is a much more ridiculous expectation of the cashier than it sounds.